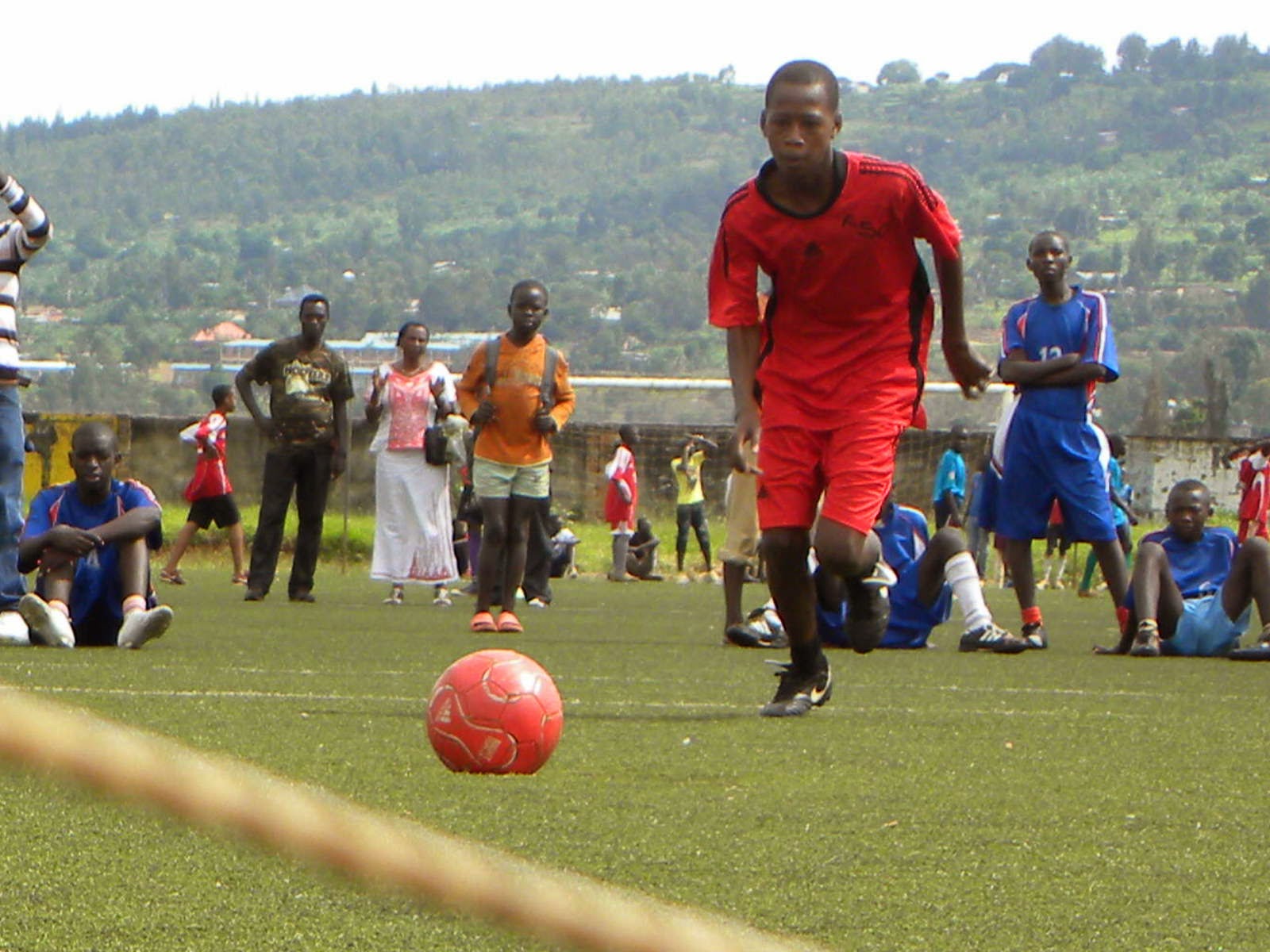 It’s May 10th as I enter the Umumena Stadium, surprisingly there are over 300 children waiting to compete for the YouthFootball for Peace this time; teams from all over Kigali and 2 teams from outside of Kigali. It is the 3rd since Nov 2011. Last year it was a great day for so many kids boys and girls at Regionale Stadium in Nyamirambo, however this time I was expecting it to be bigger, talking to
Kasimu one of the football lovers and the founder of Vision football club; 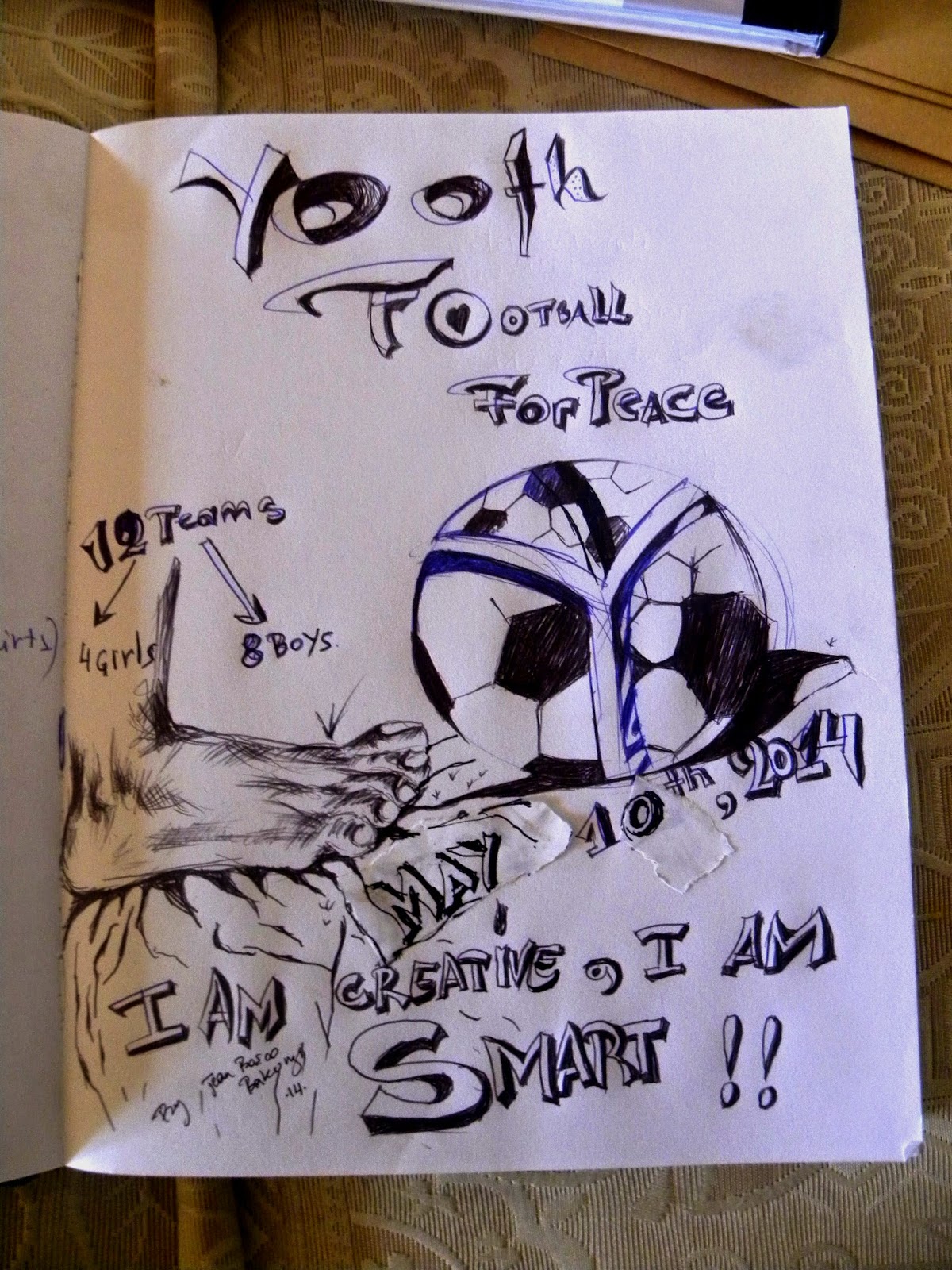 “I can’t believe how many children we have today”, Kasimu said. What was so interesting is that every team was showing so much energy during the warm up, of course one of them has to win this champion.  When we decide to involve an under 12 years old football tournament, it was one of our goals is at Uburanga Arts Studio to contribute to our community by encouraging the youth to be more creative and look forward to a bright future! You may want to ask me, why am I involving myself in to football when I am a painter? First I love the nature, but most I am a dreamer; so is everyone else; I see art everywhere, however the nature build my art, I grew up playing football on the street, ever since then, I am always attached to pass by kids doing the same thing, however  we have see many options where someone grows up without any hope and end up playing for a bigger team like Chelsea FC or other bigger teams, I believe Art can bring hope to so many kids who love soccer; it’s actually interesting when I was chatting to Déo, the coach of Kiyovu Sports FC, he told me something I have heard from other coaches before, that they volunteer so hard to put these teams together, they invest in so much time and money; however many investors  never look at them or even help them to bring in more activities in children football’s  life; “I am thankful for the youth football for peace to be here, this way I know and my team knows that at least every year  there is something to look forward to, this will get the kids to work more hard; if it continues like this very soon we can have football player whom can join senior teams by the age of 16”Deo said! Every one of coaches talking about the challenges they have, the most were about that they don’t have enough workshops and material to do their jobs well, otherwise, football could be a great investment for anybody. 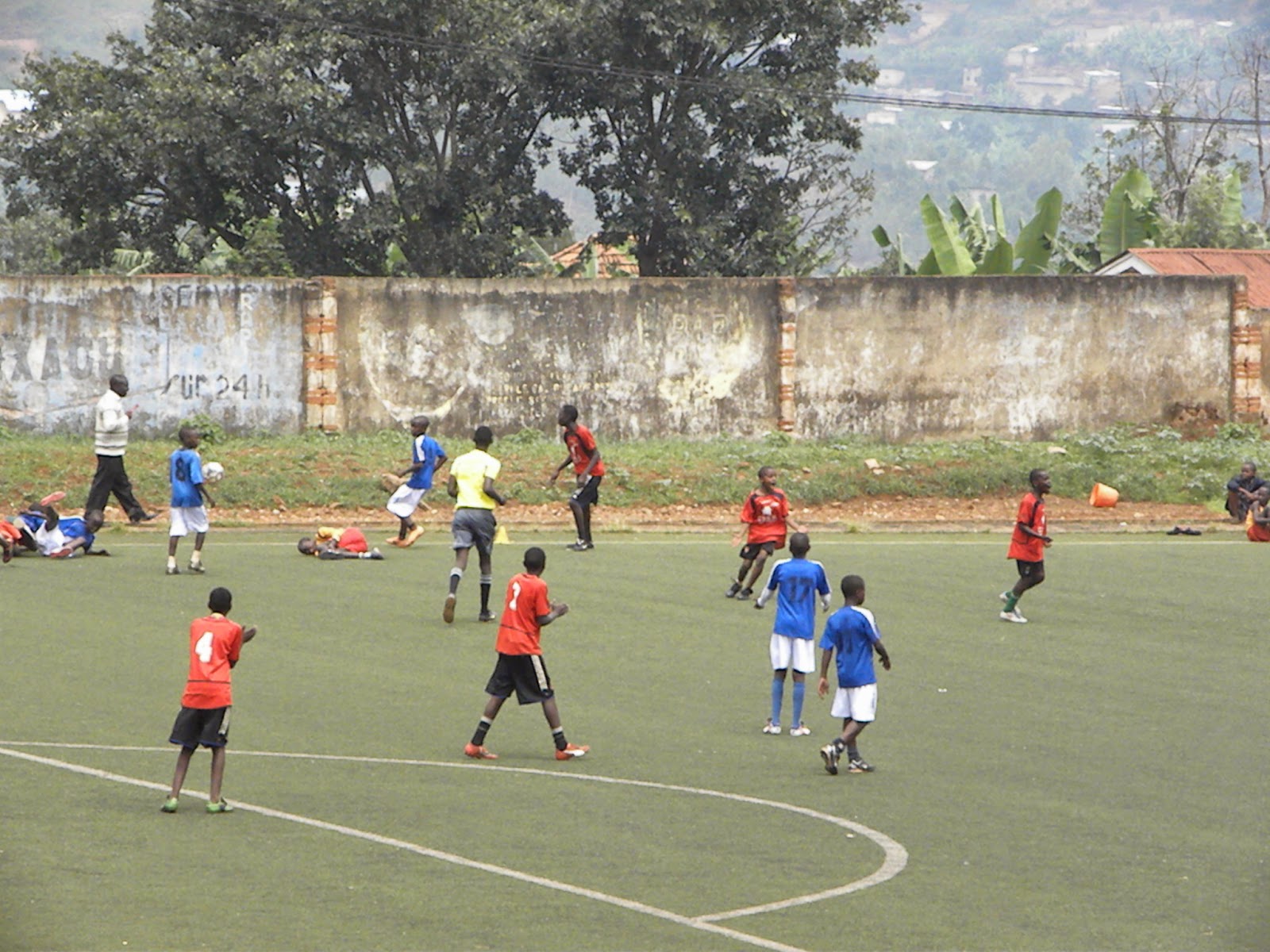 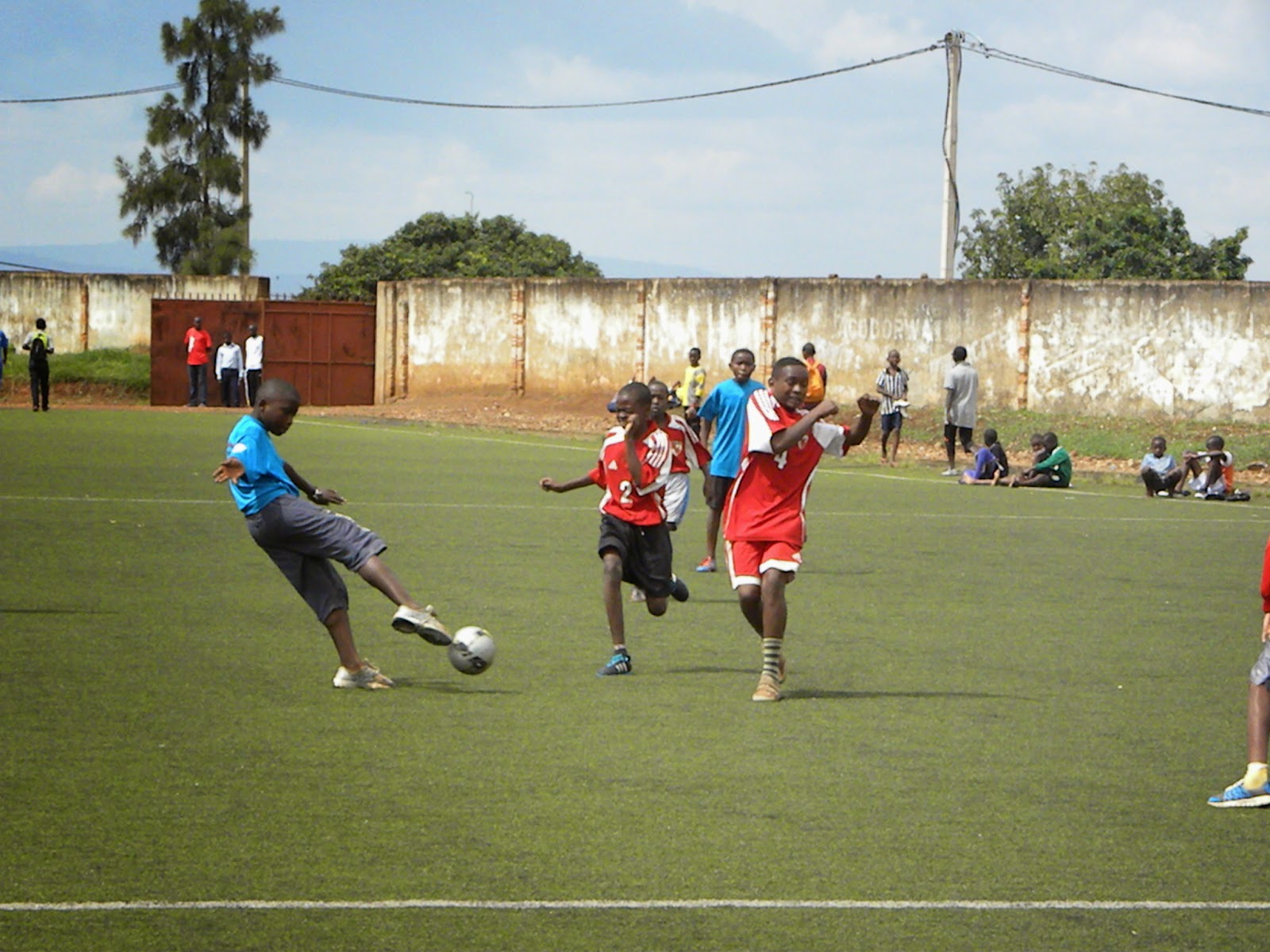 Our main topic this time was I AM CREATIVE, I AM SMART! I thought, it would be great for the kids to hear, and to talk about it; Didier who scored the last goal that put Kiyovu FC to win Youth Sport  Fc, told me that, he had such a great time, and he was happy to compete with kids from different places; “I am going to work hard, because I know my talent means something, I want to grow up and be more like Didier Drogba, I would love once to play in the champions league” Didier Said. 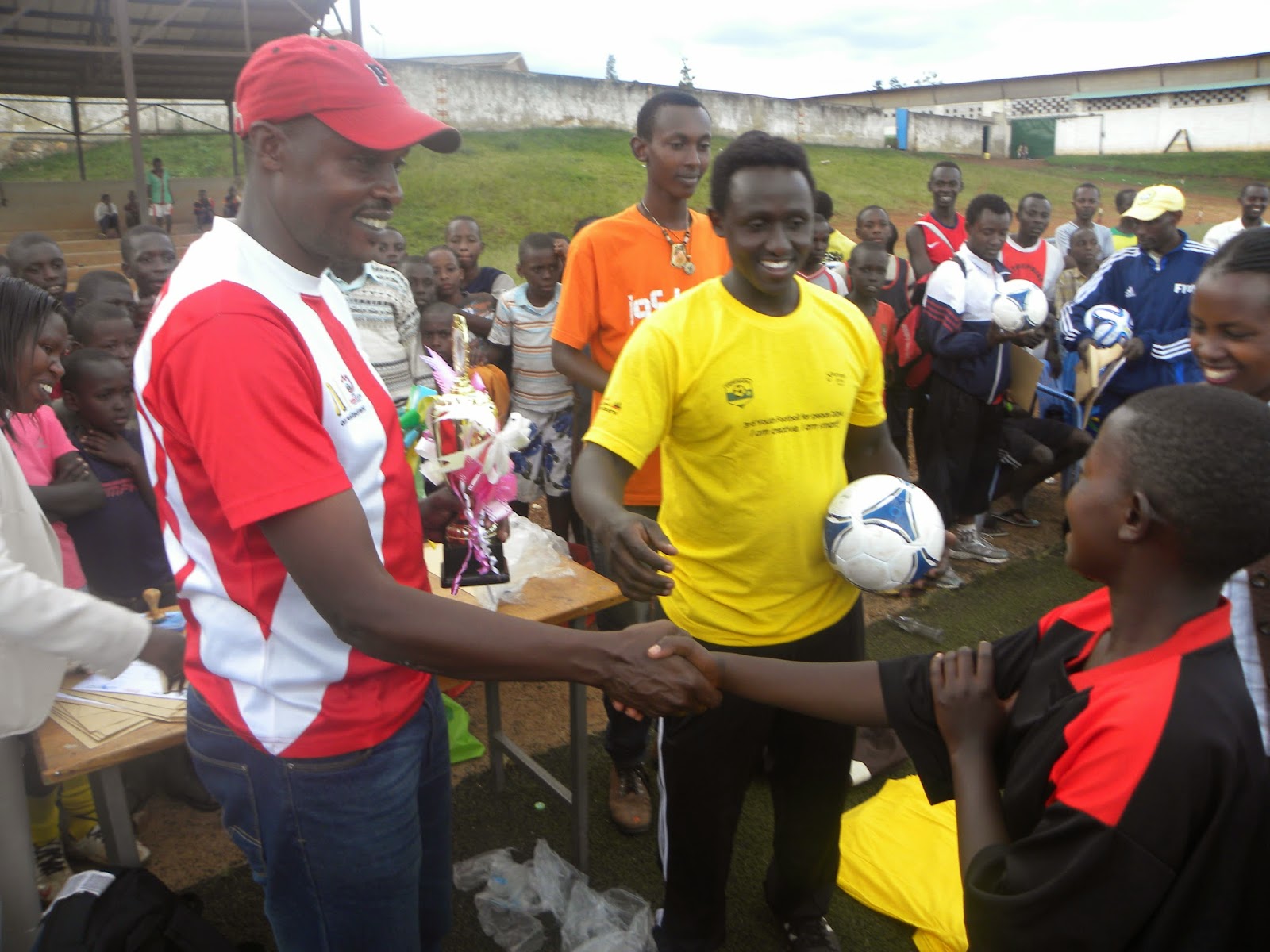 I believe there is hope here, they could be a benefit in and outside you if you could support the youth to achieve what they are passionate about; I myself I chose to try; I thank very much such organisations like Amitie Am Sand- Amizero that has been a great sponsor of the YFFP since last year 2013; I also thank very much as well Coca Cola

for their  great support this time; I a pleasure to thank coaches of these teams, who work so hard to change so many people’s lives through football; thank you for every single child who came and  played a peaceful champion and made this day a great one, I encourage the ones who lost to work hard for next year; congratulations  to Kiyovu fC/ boys and Nyundo primary School FC/Girls for their win of championship. I also thank FERWAFA for coordinate football in Rwanda. 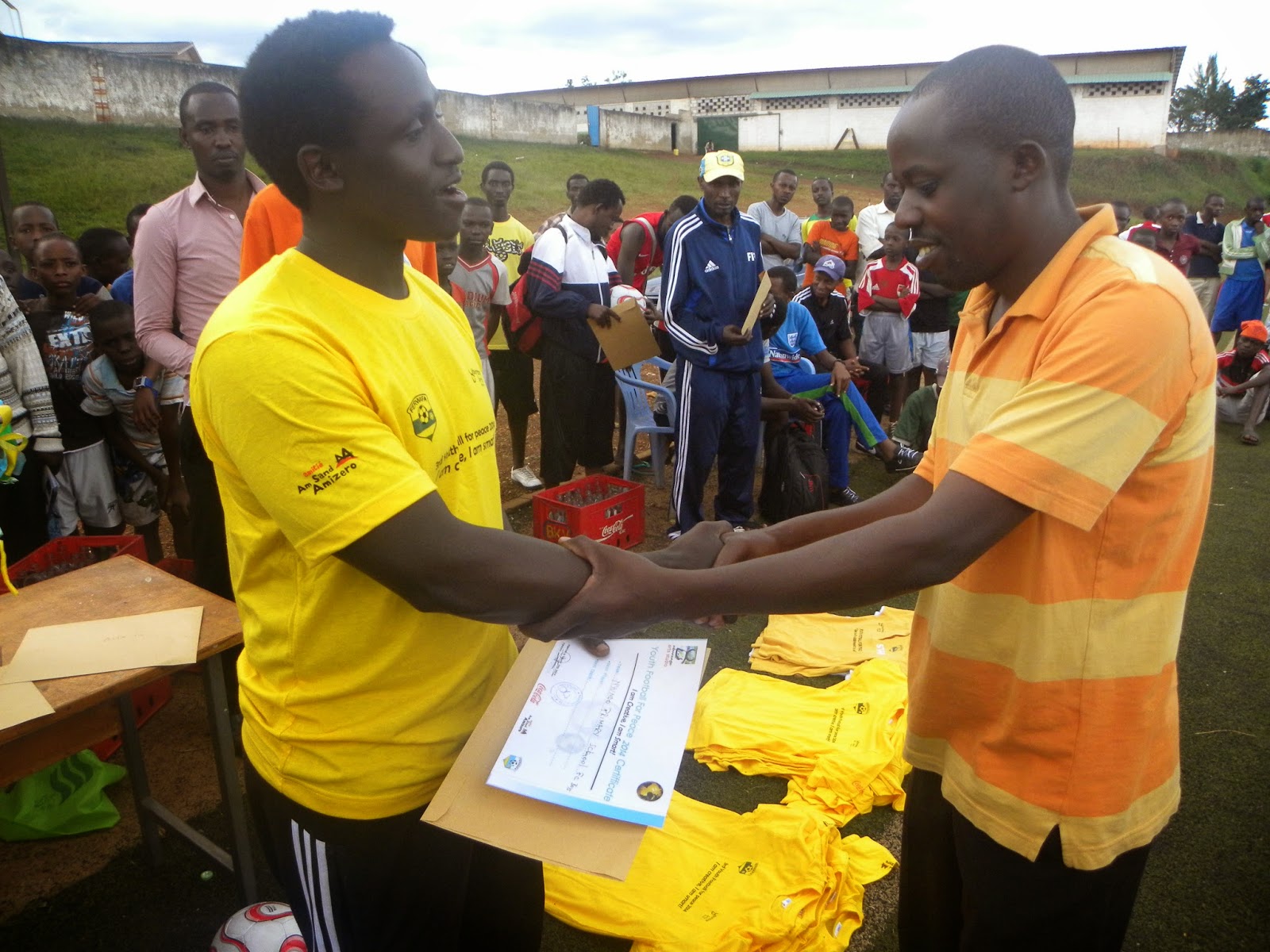 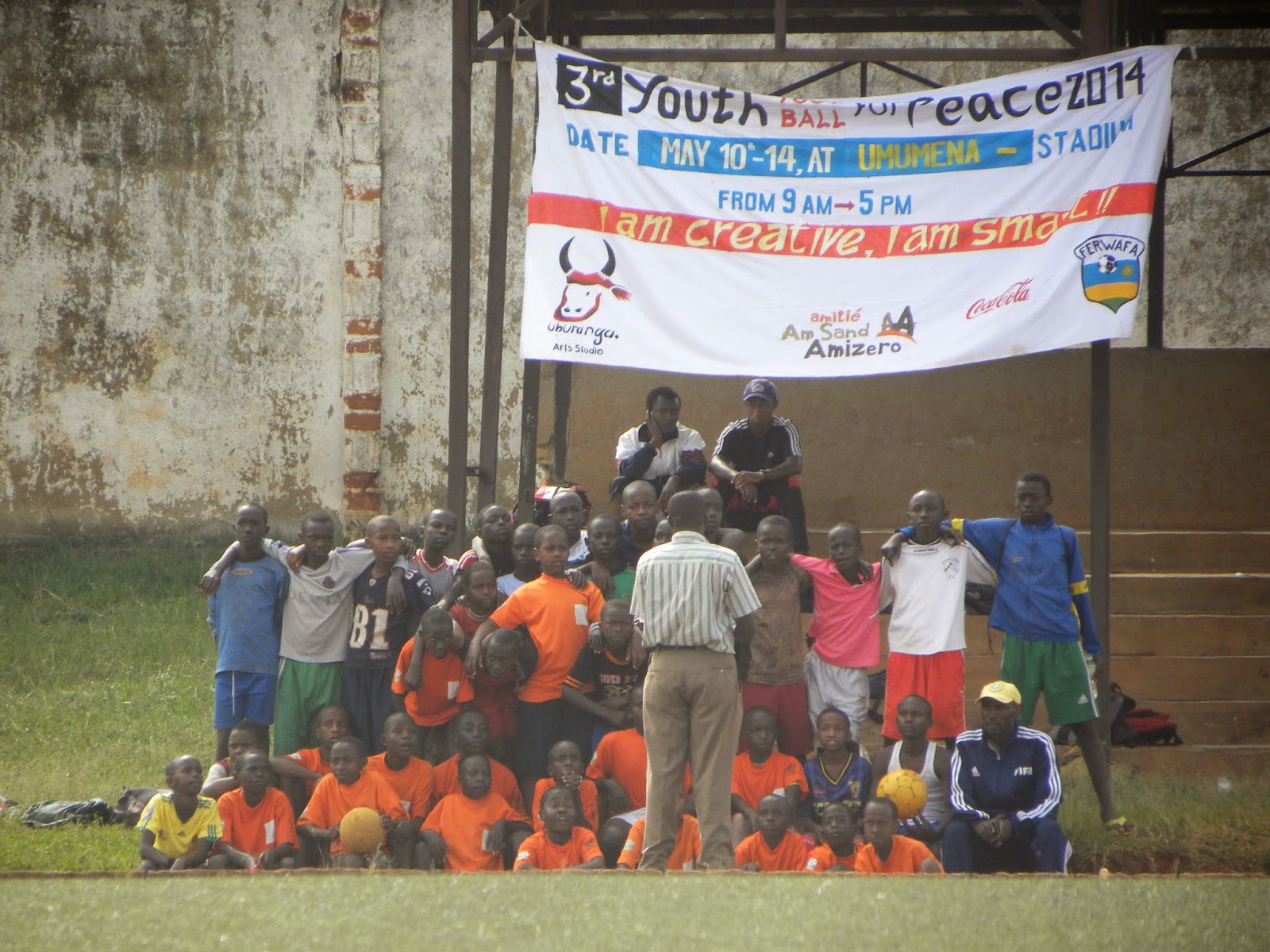 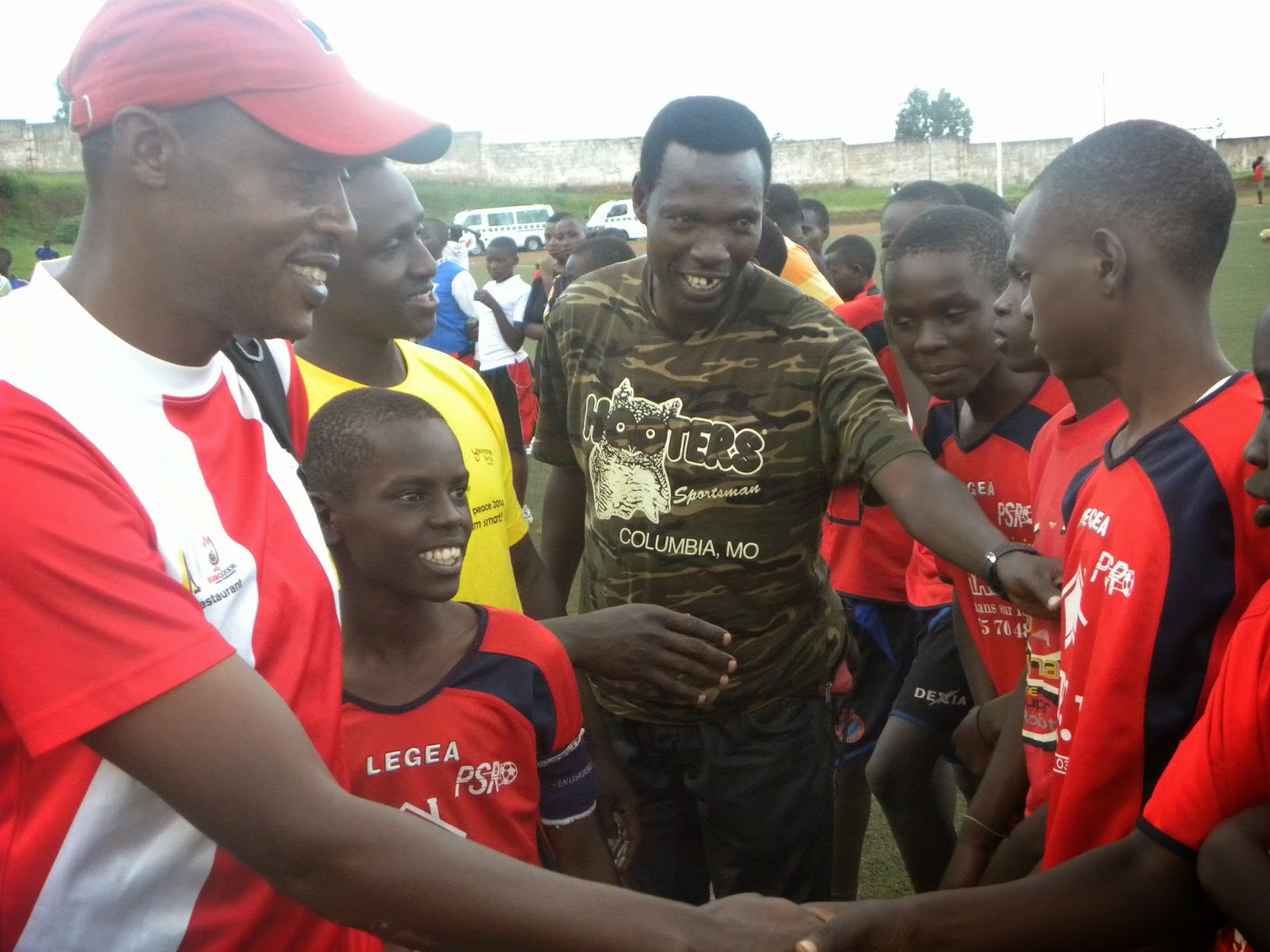 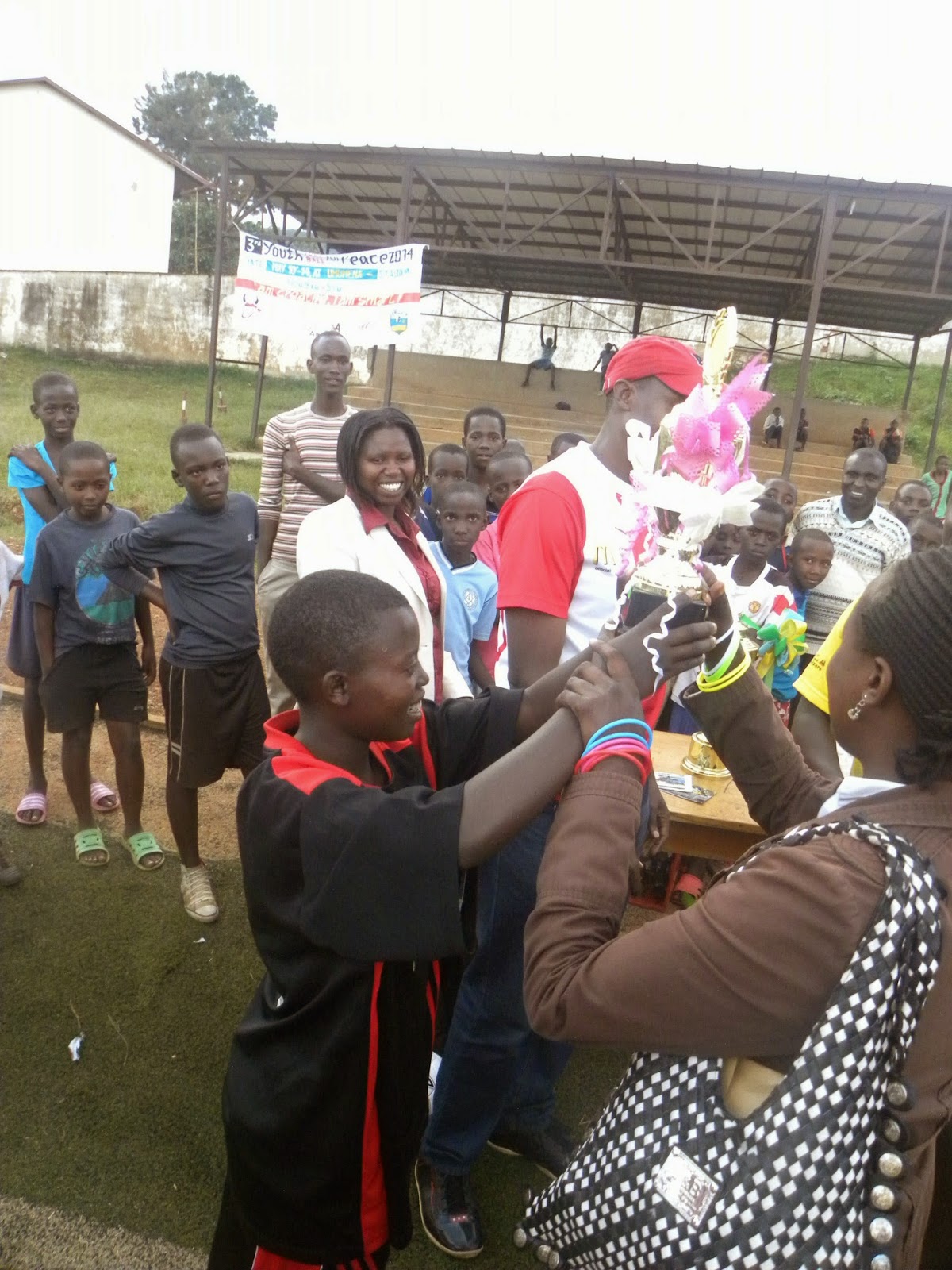 Jean Bosco Bakunzi is a Rwandan visual artist who chose to use his art to encourage the youth through different activities; I am also the founder of Uburanga Arts Studio
Are you interested in joining Youth Football for Peace or all to bring in more ideas; contact me at jbbakunzi@gmail.com
Posted by Uburanga Arts Studio at 04:19 No comments: 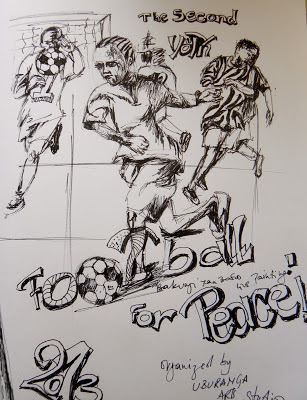 I got the idea for a new football tournament in 2011. I was hanging out with the children at Gisimba Memorial Centre in Nyamirambo, Kigali, as we were supposed to have art classes that day. The lessons, though, didn't happen that afternoon; instead we all ended up playing soccer. This took my memory back to days, when I was younger playing soccer on the streets with my friends. The children and I formed small teams so that we could compete for the day.

Later, I came to realize that one of the main goals at Uburanga Arts Studio (the fine art studio I founded in 2010) is to inspire children. It is our dream that all children will grow up loving their skills and working hard to make their dreams come true. I then decided to work on building a small football tournament. I knew it would be a great thing to do that could bring many children together and play peacefully.

In December 2011 the first tournament was held in Nyamirambo. I was expecting it to be a small thing similar to the days playing football at Gisimba Memorial Centre. I was surprised how quickly news had spread of the tournament, bringing together 250 children that day. 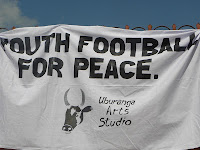 The tournament happened in December, 2011. 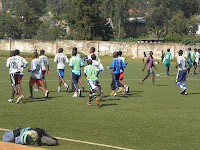 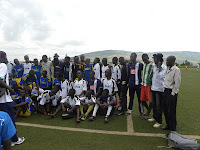 The second Youth Football For Peace tournament took place at Nyamirambo Regional Stadium, Nyarugenge District, Kigali, Rwanda. This time, the theme was Take Care of your Skills Before It's Too Late.

Ten teams, both boys and girls teams, joined the tournament. The six boys teams were Centre Scolaire Amizero FC, Vision FC, Kiyovu FC, Gisimba FC, AS Kigali FC, Ejo Hazaza FC, and the four girls teams were APR A and B, Centre Scoraile Amizero FC, Gisimba FC. This event took place on Saturday with the matches kicking off from 9:00 am till 5:00pm at Nyamirambo Stadium in Kigali. 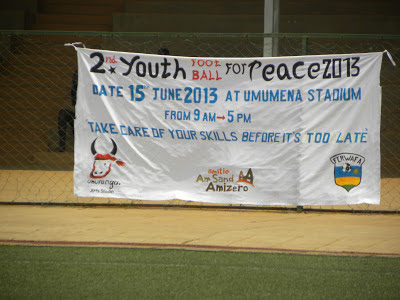 The Tournament were suppose to take a place at Mumena Stadium but we got lucky to have Nyamirambo Regional Stadium, It's even a better place.

Centre Scolaire Amizero FC walked away with the trophy on the boys side, and APR FC were the victors on the girls side. This all happened after a stiff display of tactical skills, as all teams struggled for a victory.

I believe that investing in children could build a better future.

I also did a mural at the stadium. I was hoping to show the kids that when you do what you love, and when you do it well and with passion, you will find great benefit for your future and happiness.

Amidst fun and excitement, the day ended. The first and second placed teams were awarded with trophies, while everyone received certificates, balls, sportswear and t-shirts.

Uburanga Arts Studio would like the thank the Federation of Rwandan Football Association (http://www.ferwafa.rw/) as well as Amitié Am Sand-Amizero (http://amizero.psweb.org/) for the support that helped make the tournament a great success. 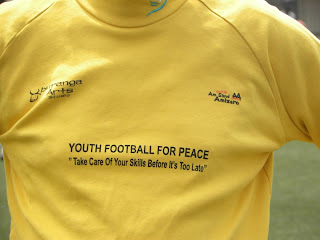 The winning teams on both the girls and boys sides received a trophy, new football jerseys, and a football, while the second placed teams received new jerseys and a foot ball. In addition, each team that participated in the tournament received a football as well as a t-shirt and certificate of appreciation for each team member. Lastly, the players who were voted 'Most Valuable' received new training equipment. At the end of the day, all the tournament participants shared soda and had the opportunity to get to know each other.

I would also like to thank my staff members at Uburanga Arts Studio, the teams’ coaches who took the time to train the children, and all the players for participating in this tournament.

Feedback from the Participants of the Tournament

Gasana Aliene from Gisimba FC stated, “I’m very happy today, to have met new kids from other places but above all I enjoyed playing football since it’s my hobby."
Mucyo Didier of Vision FC said, “It was one of my best moments ever, I got new friends, gifts and played football to my best level.
Just like Gasana and Didier, all other children were very happy, not only for meeting fellow football fans and having an opportunity to play against new teams, but also for the awards they were given, such as the t-shirts, footballs, and certificates.

I believe that art heals people physically, mentally and emotionally.

Posted by Uburanga Arts Studio at 21:27 No comments: